A Chronicle of My Adventures on "The Patriot" 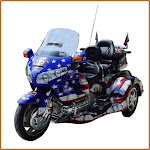 Yes, I know.  I haven't completed my trip report yet for my epic adventure through all 48 States, but I will post that soon.  In the meantime, I am heading out tomorrow for another road trip!  This time it is a short, leisurely 670-mile ride to Huntsville, Alabama to attend the Gold Wing Road Riders Association Wing Ding 37.  I will be using my SPOT Personal Tracker so you can follow my trip by clicking here.  Hope to see you on the road!
Posted by Gary at 4:35 PM No comments:

Thirty Days on the Road – this Year’s Epic Adventure!

My epic adventure this year of 30 days on the road begins in Stafford, Virginia on Saturday, July 18.  My first 10 days on the road will be a thrilling Iron Butt Association ride called 48 Plus! that involves visiting all 48 lower states plus Alaska in 10 days or less.  Ron Ayres set the record in 1998 when he visited the lower 48 states in 6 days and 5 minutes and all 49 states in 7 days and 20 minutes.  I will be thrilled to safely ride through all 49 states in 9 or 10 days.  Then after resting in Hyder, Alaska for a day, I plan on a relaxing ride back through British Columbia and Alberta, Canada and camping out for 5 or 6 days in Wyoming and Montana.  I will then meet up with some 1.2 million of my best biker friends August 3 – 9 at the 75th Annual Sturgis Motorcycle Rally.

Overall, my route to Hyder will entail a planned 73 gas stops over 8,991 miles.  For those who like calculators, at 10 minutes (very optimistic) for each gas stop, that’s more than 12 hours pumping gas during the 8 – 10 day ride from Stafford, Virginia to Hyder, Alaska!  Argh.  The 48 Plus! ride and the remainder of the trip returning from Hyder, camping in Wyoming and Montana, touring around Sturgis for a week, and then cruising home will add some 12,890 miles or more to my Gold Wing's odometer in less than 30 days.  In context – 12,890 miles is farther than half way around the earth at the equator; it is farther than traveling from the North Pole to the South Pole; and it is twice as far as traveling from Beijing, China across the Asian and European continents to Lisbon, Portugal.  Here is my planned route. 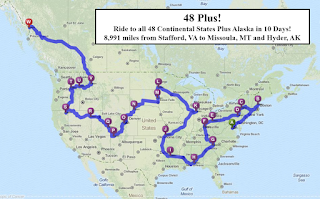 I have a SPOT Personal Tracker so you can track my 48 Plus! adventure and my travels while camping out, visiting Sturgis, and returning home.  I will be posting daily journals on this blog that reports 'states visited' and 'miles traveled' during my 48 Plus! ride, and I will be Tweeting photos and other spontaneous updates throughout the 30 days from my @AmJourney handle using the #IBA48Plus and #BikerHaiku hashtags.  Hope to see you on the road!
Posted by Gary at 3:27 PM No comments:

Follow me @AmJourney and watch for my #BikerHaiku™.  Here is a "super" #BikerHaiku™ as an example!

Most have five or six
senses to live with.
Bikers have a seventh sense,
we feel what others cannot.
We feel the warm earth,
we feel life itself.
Posted by Gary at 7:05 AM No comments:

This is simply a test to see if I can post text and photos using email. 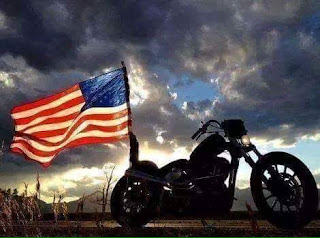 So, how much is there to say in advance?  I leave Friday morning, August 2 for a 12-day ride to the 73rd Annual Sturgis Motorcycle Rally that runs from Monday, August 5 through Sunday, August 11.  But on the way to Sturgis, I will stop off in Salem, South Dakota to visit my niece Renee and her family.  Overall, it should only be about a 4,000 mile trip to tour the Black Hills and Badlands as well as riding out and back.  And yes, my pillion seat is empty.  I will post a trip report after I return, but until then you can check out some of the photos taken during my road trip at 2013 Sturgis Road Trip (iCloud).  You can follow my SPOT tracks to and from Sturgis at the links in the top left margin of this blog.
Posted by Gary at 8:04 PM No comments:

Ninety individual riders and six two-up teams began the 2013 Iron Butt Rally on Monday, July 1, at 10 am.  As described on the Iron Butt Association web site, the Iron Butt Rally is the ultimate competitive motorcycle endurance ride. Held in August/September every other year in odd-numbered years, it covers a minimum of approximately 9,000 miles in North America over an eleven-day period. Points are accumulated by arriving at checkpoints within the allotted time and by visiting optional bonus locations between the checkpoints. It is not a race, but rather a test of planning, preparation, strategy and tactics, riding skill, and endurance.

Their amazing 11-day journeys took them well over half a million miles throughout the United States and Canada. I was one of 30 to 40 observers and family members waiting at 4 am Friday morning, July 12, for some two-thirds of these riders to cross the finish line at the Cranberry Township Marriott. Those who arrived after 8 am lost 20 points per minute, up to the arrival deadline of 10 am. After 10 am, riders became a DNF (did not finish). Once a rider crossed the finish line, his or her odometer reading was recorded and their official time was stopped. Then each rider had to sit with a judge to validate the scores for bonuses they collected during their ride. We learned at the banquet that night that there were 67 riders (five with spousal pillions) that successfully completed this event of a lifetime. Even as an observer, I learned a lot about fortitude and perseverance while listening to the stories of the finishers, and not surprisingly, I also learned a lot while listening to the stories of the DNFs. To give one a sense of the magnitude of the accomplishment of finishing the Iron Butt Rally, reflect on the route of the top finisher, Derek Dickson, who accumulated 92,524 points while traveling 11,799 miles in 11 days on a 2005 Yamaha FJR1300: 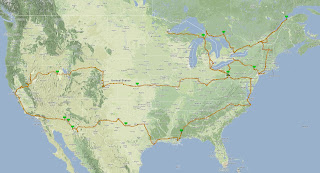 On my way home Saturday from Cranberry Township, I stopped by Somerset County, Pennsylvania to visit the Flight 93 National Memorial. It was a very somber visit to sit in a light rain and imagine the bravery of the passengers and crew of Flight 93. During a break in the rain, I captured a quick photo of "The Patriot" at the entrance to the memorial: 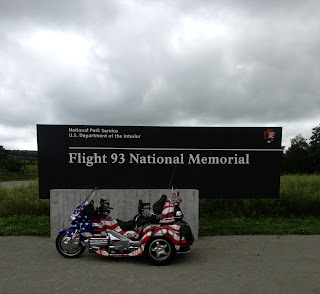 Overall, it was a good ride from home to Cranberry Township at a leisurely 625 miles round trip. Maybe "The Patriot" will attempt the 2015 Iron Butt Rally!
Posted by Gary at 7:47 PM No comments:

The Rides Begin -- Heading to Pennsylvania

I head out tomorrow morning to Cranberry Township, Pennsylvania to observe the end of the 2013 Iron Butt Rally (http://www.ironbuttrally.com/IBR/2013.cfm) and to join the riders who just finished riding more than 11,000 grueling miles in the last 11 days in their celebrations and banquet.  The Iron Butt Rally consists of checkpoints and bonus locations around the United States that each rider must visit within certain very rigid time frames (http://www.ironbuttrally.com/IBR/default.cfm).  For me, this trip to Pennsylvania is a casual 600-mile round trip, and you can follow my SPOT tracks to and from Cranberry Township at the links in the top left margin of this blog.  Although my ride to Cranberry Township is not remarkable in distance, it will be very remarkable to watch some 90-plus riders finish an event of a lifetime.
Posted by Gary at 9:05 PM No comments:

Although I did very little blogging last year, the good news is that 2012 was a moderately good year for riding.  In March, I traveled 1,540 miles round trip to the 2012 Daytona Florida Beach Week, and while there I participated in a 1,000-mile Iron Butt Association "scavenger" hunt through the panhandle and mid-region of Florida.  In August, I traveled 3,400 miles round trip to Denver, Colorado to participate in the Iron Butt Association International Meet (http://www.ironbutt.com/national/), and while there I participated in another 1,000-mile Iron Butt Association ride through the northern mountains and southern plains of Colorado.  And then in November, a friend and I rode to beautiful and scenic Appomattox, Virginia, in a relatively short 320-mile round trip through some of Virginia's most beautiful back roads.  All in all, not counting other short trips and commuting to work, I logged in 7,260 miles in 2012.  Not bad.  Lots of quiet time to think and reflect and enjoy being on the road.  My SPOT tracks for these adventures are available in the top left margin of this blog.  At the moment, my plans are to beat that number of total miles in 2013, and to do much better about writing at least a short blog for each adventure.
Posted by Gary at 8:16 PM No comments:

My wife and I were traveling in our car last weekend in stop-and-go traffic when we were rear-ended by a motorcyclist.  His pride was bruised and his right leg was scraped up, but the rider is otherwise fine.  We were stopped for a red light and the rider came upon us too quickly to stop.  He swerved to the left to miss us, but the concrete curb prevented him from moving over, causing his crash bar to catch the driver’s side rear bumper, causing him to fly over his handle bars (fortunately into a grass median), and channeling his bike as it moved forward, wedging itself between the curb and the driver's side of the car.  The bike came to rest even with the driver's door with its wheels slightly under the car.  The bike looked in pretty bad shape, but it was still street-worthy.  After we chatted with the local medics and highway patrol, we all continued our respective trips.
I passed this story around this past week because lots of times I have heard that it’s the car’s driver that doesn't see a motorcycle on the road, but I learned first-hand last weekend sometimes a rider gets distracted to his or her great detriment.  So my message is for all riders to be careful out there, because sometimes it’s our fault and not the driver of the car!
A long distance rider friend reinforced my point, with what I thought were some very surprising statistics.  He highlighted that the large majority of motorcycle-involved collisions – including this one – could have been prevented by the rider, and that drivers are truly at fault only about 15% of the time.  For example, my friend passed along unofficial statistics for Oregon motorcycle fatalities in 2011, which identified the fault for 39 accidents as follows:
19 single vehicle accidents were the rider’s fault
13 motorcycle vs. car accidents were the rider's fault
5 motorcycle vs. car accidents were the driver's fault
2 motorcycle accidents caused by animals or other factors
I don’t know how representative Oregon’s statistics are when compared nationwide, but the lesson I learned from sharing this accident with more experienced riders is that there are times when the car doesn’t see the motorcycle, but as riders we can avoid most accidents by always being aware of our surroundings, paying attention to what is in front of us, and looking for potentially dangerous situations.  Ride hard, ride far, ride safe.
Posted by Gary at 9:34 PM No comments:

The 2012 Daytona Beach Bike Week  promises to be a lot of fun this year!  In addition to enjoying Bike Week activities (http://www.officialbikeweek.com/), I will also attend the Annual Daytona Iron Butt Association Party and participate in the Iron Butt Association's "Florida Mountain 1000" (check both out at http://www.ironbutt.com/daytona/).  The "Florida Mountain 1000" is a 1,000-mile ride that must be completed in 24 hours or less!  I plan on arriving Jacksonville on March 14, and participating in the "Florida Mountain 1000" on March 15 and 16.  That gives me a full day left for Bike Week activities on Saturday, March 17, before I return home on March 18.  Click on http://spotwalla.com/tripViewer.php?id=41244f4291c685061, http://spotwalla.com/tripViewer.php?id=41264f42935c2f931, and http://spotwalla.com/tripViewer.php?id=41254f42928c80241 to check out my progress on my trip to, during the "Florida Mountain 1000," and my trip home, respectively.  Hope to see you in Daytona!
Posted by Gary at 1:59 PM No comments: